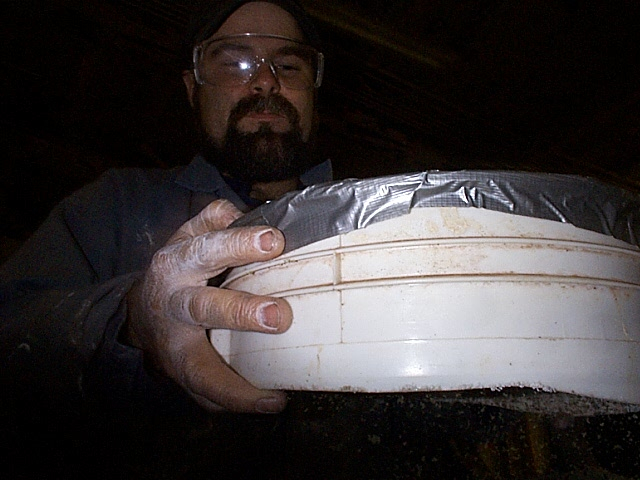 Money can't buy love but it can help one acquire the three things needed to build: tools, material, and labor. But what if you don't have a lot of money to throw at a problem? That's us! We already have most of the tools needed ( though not all ), been doing pretty well scrounging materials, and have been pouring in sweat equity by the bucketload (gross). But there are limits to our knowledge, and when it comes to electrical work I know just enough to be dangerous. I'm comfortable with "makeup", which is the hands-on installation of wire, receptacles, and lights, but layout, troubleshooting, and circuit panel work reduces me to chimp mode, scratching my head and flinging feces in frustration. OK, I exaggerate. But only just. ICYMI, this house is basically an abandoned remodel, meaning some areas were done to completion (bathroom, upstairs bedrooms), some were barely started (kitchen, den), and others were abandoned halfway through (the wiring). Some circuits w
Post a Comment
Read more 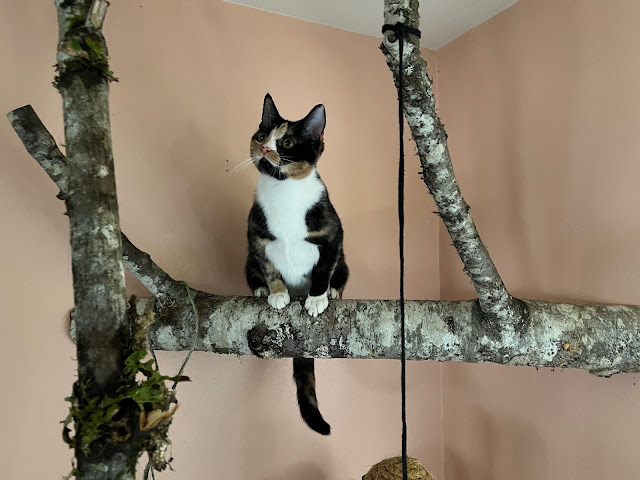 Have we gone too far? The cat branch got a new vertical element, a floor-to-ceiling limb we wedged in adjacent to the original horizontal corner piece and fastened with a couple of long screws so when wet wood dries and shrinks it stays in place. We expected Sunny and Patchouli would leap from one to the other, but it proved too challenging, so we added another piece to connect them. It worked! Aside from providing a natural-ish playground for the kitties, we like the indoor forest vibe. Who knows where it will end? But one haunting question remains: are we bringing in pests that will eat the house?
Post a Comment
Read more

Roll Out the 'Barrow 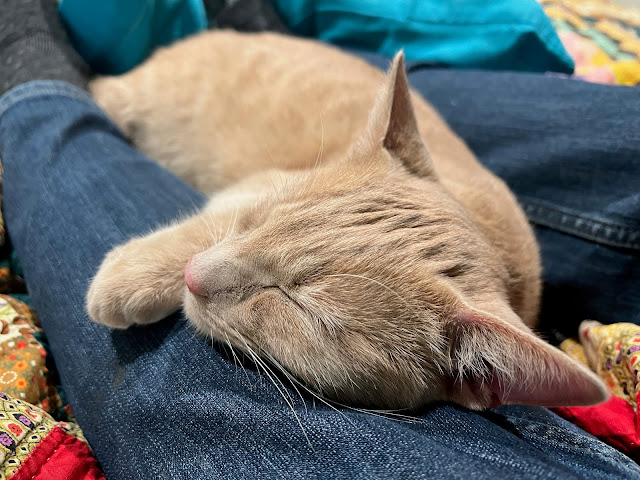 In the depths of winter here, it is easy to forget the sun exists. Today brought a reminder.   We loitered at the water's edge, watched the tide creep back in. With only an hour of daylight remaining, we decided to take advantage of the giant pile of free fill dirt just around the bend. The plan was to run a few wheelbarrow loads to our driveway, which is basically one big low spot that needs to be built up. On the short walk back from the shore, we bumped into Linda, who introduced us to Terry, been here since the '80s. After sharing our relief that the days are inching longer (sunset at 5pm today!), we excused ourselves to do our chore. In parting, Terry offered use of his wheelbarrow, which we accepted, figuring it would double our productivity. After we began, Linda surprised us by pitching in with a shovel of her own, plus another wheelbarrow. Then Terry joined the impromptu work party, so we had four shovelers and three wheelbarrows shuttling the spoils to our yard, where
Post a Comment
Read more

It's A Long Way to Temporary

Didn't have much planned for today. We both had stuff to mail and since it wasn't raining we walked to the post office, a little more than 6 miles round trip. That got us hungry and we eagerly ate reheated soup, crackers, and cheese for lunch. Simple food so good. A pretty sincere nap followed, accompanied by the cats, all four of us abed on a winter afternoon. Wiped the sleep from our eyes around 3:35 and it didn't look like much was going to get done today, but we had more or less vowed to move fridge from garage to kitchen, so we did.... That triggered more actions. I installed a fold down countertop and Sarah transferred the ad hoc cooking station from the living room. Today was one of those days where we focused on quality of life improvements versus repairs and construction. Having a sink and fridge in the same room brings us well into the 20th century, the miraculous dawning of mechanical domestic convenience. There's much to do before we lay down the permanent f
Post a Comment
Read more 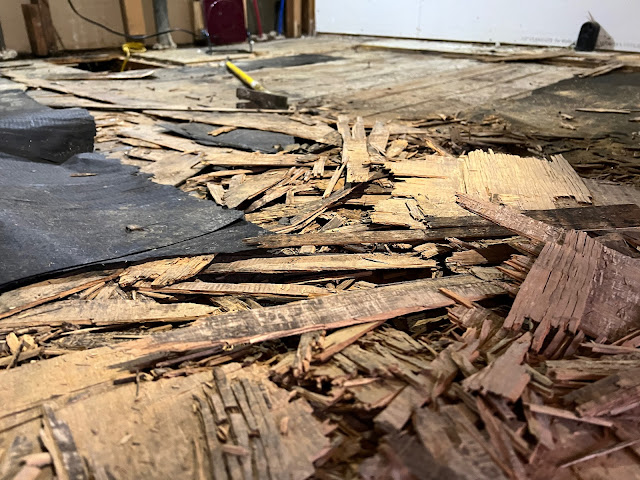 Optimism is a helluva drug. I used to get so high, man. Really out there! Like that time two months ago when I first tore into the water damaged kitchen floor. The vintage linoleum was worn away in spots and the plywood backing crumbled like shredded wheat. Start of kitchen floor demo - November 8, 2022 The shiplap subfloor splintered apart where I tried to pry it up and I stepped right through more than once. Despite that evidence, I wanted to believe I wouldn't have to replace it all. That was the Optimism talking. See, it doesn't look so bad. What rot? Gimme another hit of that Optimism shit.   Call it mission creep or a can of worms, but instead of replacing just a couple of sections of rotted wood, in the end I tore out all the shiplap, extricated two large water tanks , trenched the crawlspace , re-mortared the river rock foundation , wrapped the pipes in electric heat tape and insulation, demolished an intractable monolith , laid a plastic membrane, tucked in mineral woo
Post a Comment
Read more

It pays to have the right tool. Today I did not have the right tool. My body paid. I hadn't intended to demolish the original chimney base, but it's better gone to make framing and flooring easier and better. But I sure wished I had a rotohammer. I've had "rotohammer" on my shopping list for months, but every time I looked at one I balked at the price . It's not a tool I often use, and I already have a Makita sub-compact that's good for certain applications . But it's rotary only, so it doesn't work with a chisel tip, which is what I needed here. I couldn't find one to rent close by so I went a-knocking at some neighbors. Linda and John across the road regretted they didn't have theirs with them. Al up the hill brewed me a cup of coffee, told me he'd given his away when he left Idaho decades ago. He's been here 34 years, lent me a pointy rockbar . I have similar but with a tamper end. I gave it a go but it hurts when cold steel str
Post a Comment
Read more 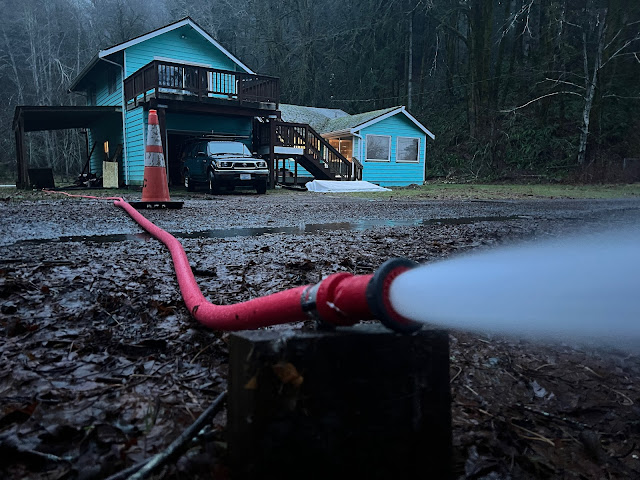 Is this necessary or even effective? Does pumping away 9,000 gallons of stormwater per hour make a difference, or is it instantly replaced via a hydrologic mechanism we don't understand? Are we bailing a boat with a hole in it? It's really hard to tell. We're just starting to get to learn the dynamics of this property. Sarah tested the soil and it drains OK--not great, but not terrible. And in normal times its absorption rate keeps up with the rain. But after a few days of persistent and increasing precip, the ground gets saturated, then add 4 more inches in 48 hours and a shallow pond manifests in our backyard. It's kind of pretty! Better to have too much pure fresh water than not enough. Even after the rain ceases, surface water from the surrounding hills will continue to trickle in, so part of the impetus to use the pump is to get ahead of this latency effect. But does it help? I ran it from 8am-5pm while it rained steadily all day. At times the standing water level
Post a Comment
Read more
More posts